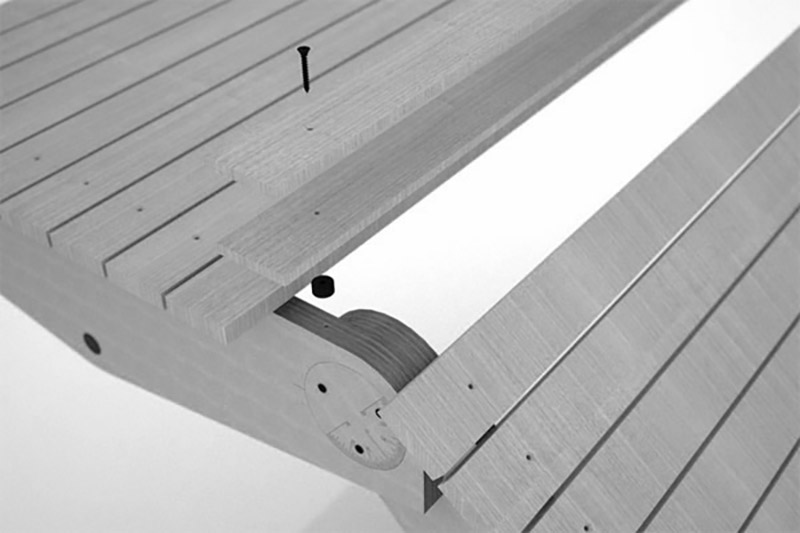 ParaSys is a reflexive assembly mechanism, developed as a structural scaffold and skinning system for a multifaceted look at the transition of the architectural body. By working through Rhino Script and Grasshopper, reality/ fabrication based constraints are pre-programmed into a tool set which allows for free form design based on a uniformly faceted linear rib system. Freeing the designer to work with form and design development as a primary concern, the Para_Mech system can be applied to an end form as an automated digital evaluation tool. The designer, once satisfied with the digital representation, simply runs the final portion of the system, which within user specified constrains of member length, density and tolerance, produces a digital document set analogous to a materially uniform fabrication process. This set produces an index of angles for rib construction, a drill pattern for the secondary skin and a total material area readout, generating all required information for immediate production.

With rapid full scale fabrication as a primary desire, a series of easily machinable components, requiring no specialized CNC tools to produce are produced, forming the primary structural system, Tooled onto these members are a set of digital analogs, angular markers, drilled holes, etc. which become primary guides for the direct translation of the digital model. To produce an accurate shell, the user simply aligns the bend angles to the provided output indexes. Once the members are assembled into the large rib bodies, a corresponding series of holes are drilled into a pre-measured set of ply strips, as designated within the output of the system. When fastened to the structural ribs, the result is a direct fabrication of the digital model. Within the uniformity and geometric constraints of the assembly system the possibility, the development of secondary plugins, enhancers and appliques become possible to enhance the functionality/ programmatic specificity of the desired end application. By development of a direct relationship between a methodology of design and an economy of fabrication a rich diversity of end applications becomes possible, presenting a new material system into the architectural world.