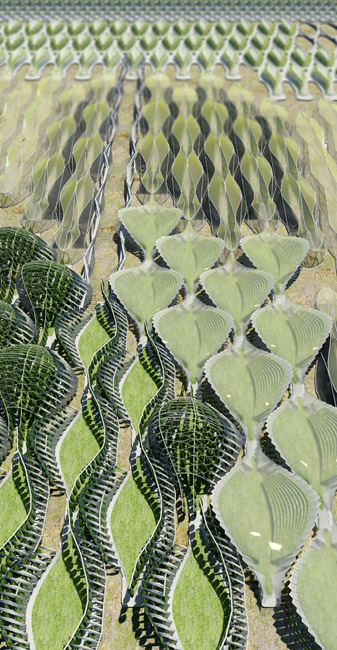 China is the world’s largest growing agriculture producer per population, with over 60 percent of its population classified as rural. Yet, recent rapid urban migration has increased demand on these regions while reducing supply producers, the effects of which have been a further exhaustion of an already depleted landscape, resulting in desertification at a rate of as much as 900 square miles annually. Protoculture addresses this high demand market presenting a prototype architectural body capable of sustaining an intra-dependent culture while stabilizing a depleted landscape. Since its initial typological definition, agriculture as a practice has shifted away from its cyclical origins towards complete dependence on synthetic stabilization. Through hybridization of agriculture with fuel production practices, reconstitution through alteration of existing landscape footprints, and exploitation the adaptive nature of the architectural material practice, Protoculture seeks to re-embed these cyclical processes as self supplying programmatic layers. The process is opened in recognition of the distinct entities within Agra Culture and the duality of scale embedded in this history. First the people and small communities which develop around the typology of the farm and their unique growth provide a rich regional heritage from which Agra Industry, consisting of product production and markets which network these communities to their consumer markets, has emerged in the now global economy. Protoculture always address the smallest scale with the intent of stabilizing the unique properties of the individual, while at the same time seeding a common market base which in time begins to network into larger entities. It is developed around recognition of the need for permanent sustainment of site, yet acknowledges the architectural construct must be responsive to transitional nature of the market. Protoculture proliferates within a regional culture of mass transition, feeding upon the synthesis of programs into macro clustering’s of hyper dense tertiary synthetic ecosystems for the sustainment of contextual environments and economies.